Traveling Pole to Pole for Charity

In 2011, Josh Cahill and myself embarked on an adventure that would change our lives forever. In 8 months we would travel from North Pole (Alaska) to Antarctica, raising money and awareness for green search engine Ecosia and the World Wildlife Foundation along the way.

Pole2Pole4Charity’s mission was to share knowledge and inspire people to think about what they could contribute to keep nature awesome. Our motto:

If every person makes even the smallest environment-saving change in their day-to-day activities, the cumulative preservation effect on nature will be huge. Together we can save the planet.

The adventure unfolded as a roller coaster of emotions, events and experiences. Now, 2 years later (at time of writing) a legacy of pictures, stories and press coverage remains.

Candice Turner, a first-minute supporter and friend, wrote the following article to wrap up these 8 magical months of charity travel. 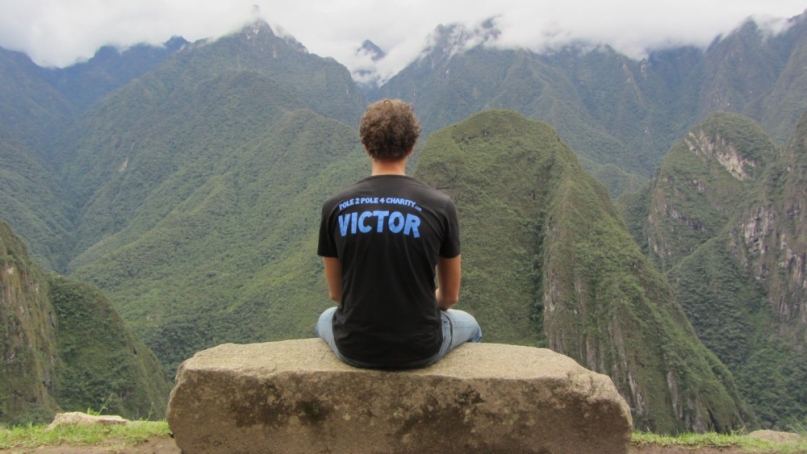 Me on Macchu Picchu

The Heart of a Man

He knew no boundaries…nothing could stand in his way.

Not even a tornado would sway him from his path. From treacherous plains, frozen landscapes, tropical jungles, and mountains…he set about on a mission and conquered them all!

From the very outset, Victor Eekhof proved his commitment to the environment, as he embarked upon a six month expedition, traversing the frontiers of exploration.

Ruggedly independent and driven by his passions, the audacious Dutch explorer tussled with the challenges of an epic expedition across the perilous plains of the globe… navigating a journey from North to South, that saw him cover a phenomenal 51, 343 km in 272 days. Along with his best friend, Josh Cahill, the two accomplished a wide variety of superhuman exploits in the planet’s harshest places.

Some said they were crazy, embarking on an outlandish escapade that could never be achieved. Others saw them as revolutionary, avant-garde activists, who inspired others to think about their environmental impact. This is what made this pair so extraordinary – agree with them or not – it was impossible not to be stirred by their willingness to seek out the unknown, to challenge the norms and to stand for something others did not have the courage to stand for.

Their backpacks laden with all the necessary supplies, they walked, ran, drove through canyons, and chased tornadoes. Wanderers, adventurers, world explorers…dreamers. 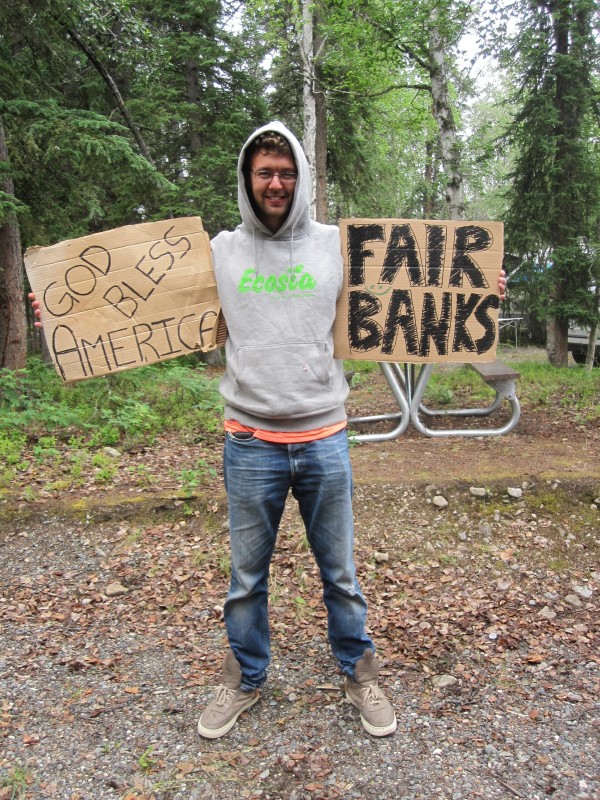 Me hitchhiking from Canada to Alaska

From childhood we create a picture of our physical world: the sky is blue and the Poles are white. But before this century ends (perhaps even sooner), the white will be replaced by blue water every summer; the Poles are warming so fast that by 2050 they may be largely ice free in the summer. With a mission to raise funds for Ecosia, Victor and Josh set off to discover and raise awareness for a world where polar bears and penguins roam; to shed light where man has plied a land where air, ice, and water intersect with our own waste.

From a sweltering 47C in Toronto to sub-zero temperatures in Antarctica, it was not only the Mercury that fluctuated along the arduous journey. Though there were setbacks suffered in the first few months, especially with the departure of Josh from the trip to handle the fundraising from Europe, Victor pressed on with stamina and endurance like no other. The mental capacity to push through on the gruelling, tedious, and often-times monotonous feat, for months, challenged Victor internally.  “I was never in one place for more than 3 or 4 days at a time, and this fast-paced type of travelling took its toll on me both physically and mentally. It was a truly taxing time for me,” Victor imparts. 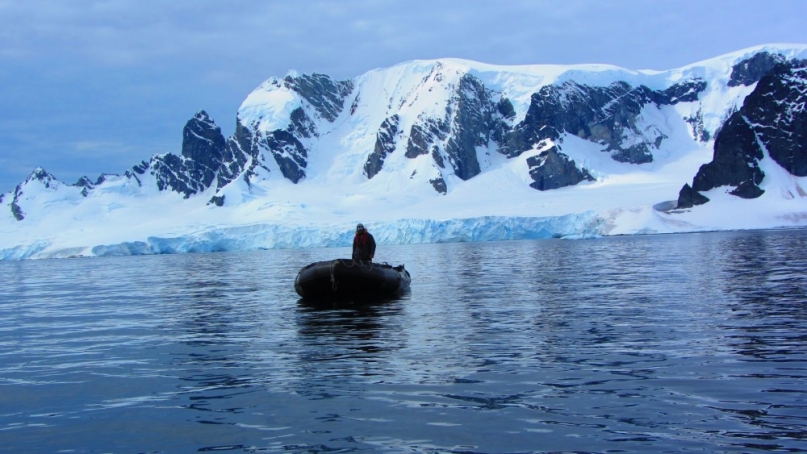 A lonely dingy in Antarctica

Along the way, Victor wrote prolifically about the places and people he encountered with stimulating fervour and plans to publish a book later on his adventures along the way. “One of my fondest memories of the trip was when Josh and I drove from East to West across the United States in only 2½ days, and along the way faced a serious of storms, including out-running/driving a tornado. It will remain etched in my memory forever,” he relayed.  Following this, Victor embarked on a 240km walk from Seattle to Vancouver. “I have never walked that far in my life and at the end, had to throw a pair of shoes away. But it taught me a valuable lesson, that we can do anything we set our minds to.”

Up there in his top moments was his passage through Alaska and hitchhiking through the state for two days, followed by a four-day bus ride across Canada. After a few months of traversing the North American plains, Victor reached his dream destination and was energised to soak in all that South America had to offer. From the spectacular, diverse fauna and flora of Costa Rica, to becoming a buccaneer aboard a cargo ship from Panama to Columbia; his experiences were nothing short of inspiring. He visited islands in the Amazon, saw the renowned Machu Picchu and Salar de Uyuni, hiked in El Chalten, stood in the showers of the Igauzu Waterfalls and spent the last days of 2011 at the end of the world in Ushuaia before making his final stop in Antarctica.

This was not to say the journey, like many travellers before him, was not without its trials and tribulations. The northern parts of South America were perilous and transport was extremely inconvenient, especially in Colombia, Venezuela, Guyana and Suriname. Tiresome and all-day bus journeys, that almost saw the buses going off cliffs, crashing into ditches, hitting large animals, and speeding through dark dust roads all night, made him think twice about travelling by bus before moving onto his next destination. Bureaucracy, or lack thereof, was also challenging for the intrepid traveller, and nowhere before had he experienced such a macho, condescending culture among figures of authority. 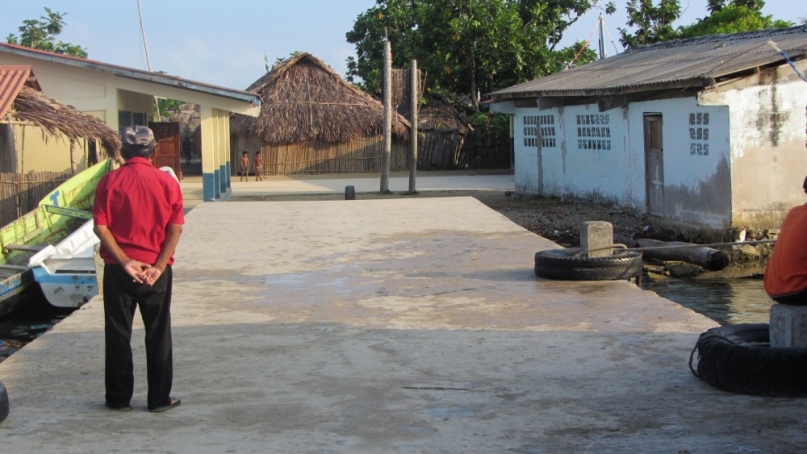 Nevertheless, he trod on, persevering with his goal, raising awareness at every point he stopped. “I was motivated primarily by the openness of people I met along the way for the idea and their willingness to support the project.” Saving money on accommodation in such a lengthy trip was essential, and Victor relied on the hospitality of local people and found hosts through CouchSurfing, a volunteer-based worldwide network connecting travellers with members of local communities. It addresses the human need for connection and offers inspiring relationships and experiences, affording travellers the opportunity to get to know the locals when they travel – their experience, according to their 3.5 million plus members, is in effect more “authentic.” For Victor the importance of the mission of the trip being instilled in each person he met was tantamount to the success of the project: to raise awareness and garner as much support for the environment as possible.

If there is one thing I will take from this trip that has shaped my life, it is that man has within him a strength that one cannot measure until you find yourself in the most perilous of circumstances. I also learned to never give up on your dreams and to trust yourself to test your limits and have the courage and might within yourself to succeed.Victor Eekhof, 2012

Candice Turner is an experienced communication professional with extensive knowledge of all mediums- Radio, Print and Television. Multi-market exposure having worked in South Africa, London, Dubai and Jordan.

Mini stories 4: A postcard from the coldest...