Karaoke bars are intriguing. Drunk tourists get dragged into them, locals visit them after a long night of drinking and dodgy businessmen use them for their shady business. I’ve visited a couple of bars in Germany, Cambodia, South Korea and China. All of them have separate stories but today I will tell you the funniest one. 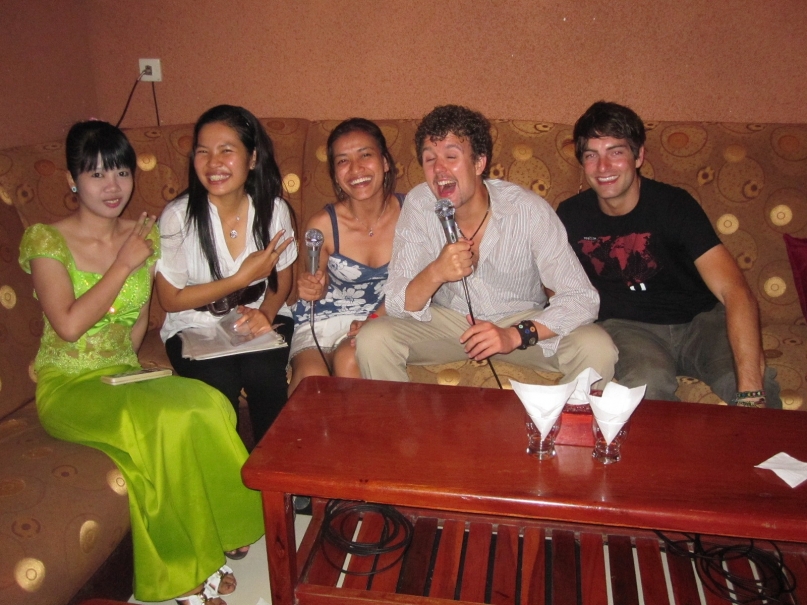 Enjoying myself at a karaoke bar in Cambodia

Dandong, the capital of nothing

We begin this story in Dandong, North East China. This little border town is famous for.. well.. nothing. Then what was my business there? I had booked a tour to North Korea which was leaving a week after I arrived in Dandong, so I decided to explore this border town. This was a decision I would soon regret. For starters, there is nothing to do in Dandong. There are two cafés with wrongly spelled Italian and American names where you can get crappy lattes for € 4 each. The biggest attraction of the town is the local Tesco. 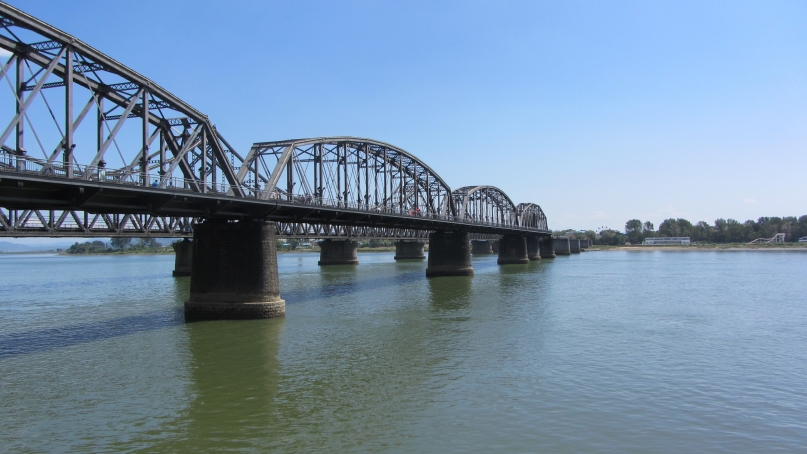 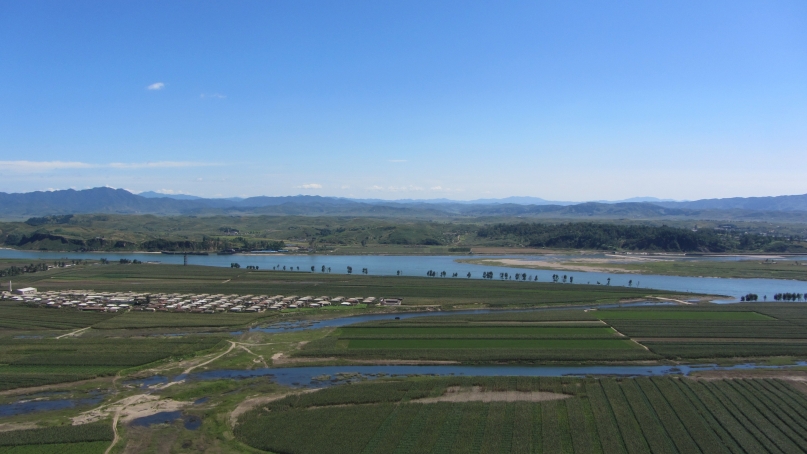 View on North Korea from the Dandong Great Wall

Let’s introduce the first character of this story. Let’s call him Steven. His actual name, Stephen, isn’t used to protect the innocent. After a long bus ride from Dalian (which surprised me in a positive way, it’s an upcoming Hong Kong-like Chinese city) we arrive at the main (and only) bus station in Dandong. The only other foreigner in the bus stands up out of his seat, only to stand in an awkward position for the next 3 minutes. The line of disembarking locals doesn’t seem to give Steven any room to merge. The “really?” look Steven is giving every passing person puts a smile on my face. (Bonus: more awkward moments in China)

“Are you also here for the North Korea tour?”, Steven asks me as soon as we go outside. I nod and we decide to get a beer. A couple of hours later we head to the train station, where we are supposed to meet the other members of the tour. After a quick briefing by the tour guide we’re on our own again, but this time there are 9 of us. “Let’s get a beer”, Steven proposes. After a couple of beers and some delicious sea-food BBQ from a restaurant which boasts a completely burned-out (and never renovated) kitchen we decide to head out to find the best nightlife in town. We get in a cab and tell the driver to take us to a bar. “bah”. “BAAAH”. We are unsure if the driver got it but he is taking us somewhere. Oh, at this point Peter, one of the tour members, has joined us. The rest of the group decided to rest, read or have sex with their girlfriend. 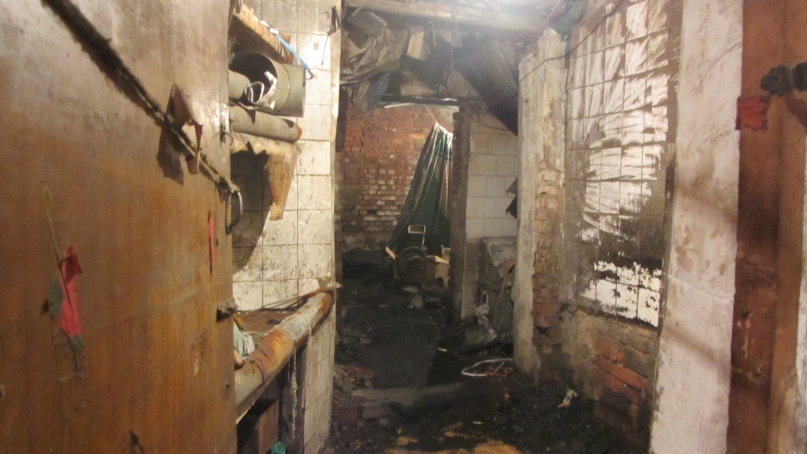 On my way to the “toilet” 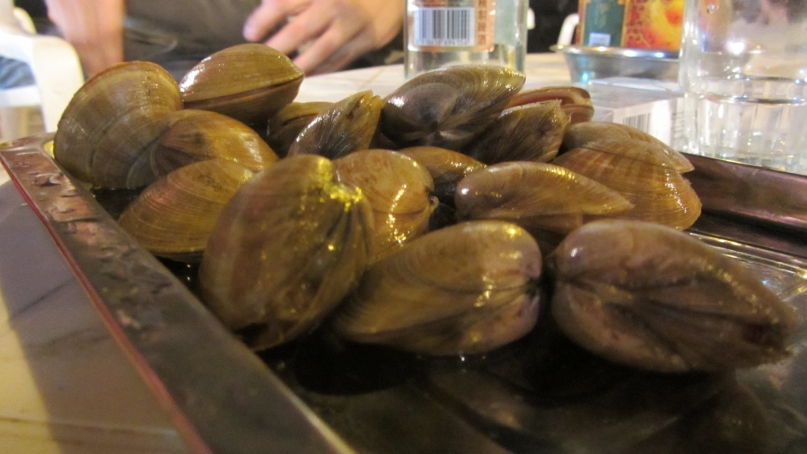 The cabbie stops and points at a building on the left. The lights are burning in a couple of storefronts in this street which indicates that this is the main clubbing area. We get out and start looking around. Steven spots a bar with a couple of girls waiting at the entrance who are overly happy to see us. “Shall we go in here?”, Steven asks. Both Peter and I are sceptical. “Yes, yesss, come in heeeah” the choir of girls yell in the background, dragging Steven into the bar like an octopus drags in his prey. “Ok, but only for one beer”, Peter and I decide.

As always, it starts with one beer

Once inside we are swiftly shown to a private room. I have to admin that the large L-shaped leather couch, the 2 by 2 meter colorfully tiled “saturday night fever” style dancefloor and the huge projected screen did seem very comfortably to have one beer. The girls arrange themselves in a way that all three of us have at least one of them on each side. The receptionist comes in with 10 beers. We argue that we only ordered one beer, but our arguments are ignored and all beers are quickly opened. All right, 10 beers it is, that can’t  possibly be that expensive? A little time passes in which we actively refuse to sing to the song on the screen. We came here to have a beer, nothing else. The door opens and the receptionist comes in again, this time with a big tray of fresh fruits. Again, he ignores our objections and puts tray on the table. “Well, then we simply won’t eat the fruit since we didn’t order it”, Peter proposes. A minute later, one of the girls grabs a piece of pineapple and puts it in her mouth without any hesitation. All other girls follow her lead. I give Peter a questioning look, since we both realize this is bad news. Meanwhile, Steven doesn’t seem to have a care in the world; he is too busy entertaining two girls who are constantly demanding his attention. [edit: Stephen explicitly insists that there is to be a mention of his, and I quote, wonderful smooches]

But wait, there is more..

For a third time, the receptionist comes in, this time with 3 more girls. This is where Peter and I draw the limit and try to convince Steven to leave. “Come oooon, this is fun, right?”, is Steven’s reply. I come up with the idea to leave and see what the current bill is. If we only got charged for the beers, we would stay a bit longer. You guessed it, they charged us for the room, the girls (each girl individually), the food and the beers. The total for the 15 minutes we spent at this place came to more than €200. We obviously refuse to pay and ask a customer who is on his way out how much the actual bill should be. He agrees that we are grossly overcharged. We offer to pay for the beers and the room, but since the receptionist is in no mood to negotiate, we decide to leave the amount of money we consider to be fair and head out . At least, that was the intention. The 9 girls are now blocking the door shouting “pay, you pay now!” at us. We ignore their chants and forcefully push ourselves through the barricade. We start walking away but none of the girls seem to have given up. 3 of the girls grab me by my T-shirt while still yelling things in Chinese and broken English.

The scene continues for another 10 minutes, in which each of us breaks free from the girls for a second while the other two are being held onto. A small man with a curly wire hanging from his ear joins the crowd. This, as it seems, is the bouncer. Peter decides to try negotiating with the girls in order for them to let us go. Since it’s still unclear how much money the girls want, he gives them the fair amount of cash he had in one of his pockets. The girls happily accept the token and let go of him for a second. Meanwhile, I’m still clamped on by 4 girls and Steven is yelling to another group of 3 girls who apparently have ripped his shirt. I push my way out of the group of girls towards Peter and Steven who have broken loose, only to find the bouncer blocking my way. “Pay, pay more now!” is his demand. I’m not having any of it and decide to cross the road, but the security guy follows me. He halts me and reaches for his phone to call for backup. I seize the moment of inattention and make a run for it. Steven and Peter see this and follow my lead. There we are, three grown men running from a group of girls. We get in a cab and tell the driver to take us anywhere but the street we’re in. We have a good laugh and decide to have a couple of drinks more.

The morale of this story: Don’t let girls eat fruit or you’ll pay for it.

Wow! And they say it’s tougher to travel as a female. This is the second story I’ve heard like this this week! I love karaoke bars, but then I’ve never had to pay for random girls to eat pineapple…

I guess karaoke bars are different per country 🙂 In some countries it’s purely a tourist trap, in others it’s rooted deeply in the culture. And, to be honest, when we walked into that karaoke bar we knew we had it coming 😉