Home » How to cross the Colombia Venezuela border
ColombiaMy adventuresVenezuela

How to cross the Colombia Venezuela border

Have you ever seen Quentin Tarantino’s movie “Death Proof”? If you haven’t, an important part of the movie is when the main character, a stuntman, invites a prostitute into his ‘60s American sports car. She gets in, and he starts driving really fast, eventually crashing. The thing is, he is wearing a stunt-man seat belt, and she doesn’t have one. A few hours before I wrote this article I felt like the prostitute in question. This is a story about taking a bus from Cartagena (Colombia) to Caracas (Venezuela), crossing the Colombia Venezuela border at 2 am and making it out alive to tell it all. 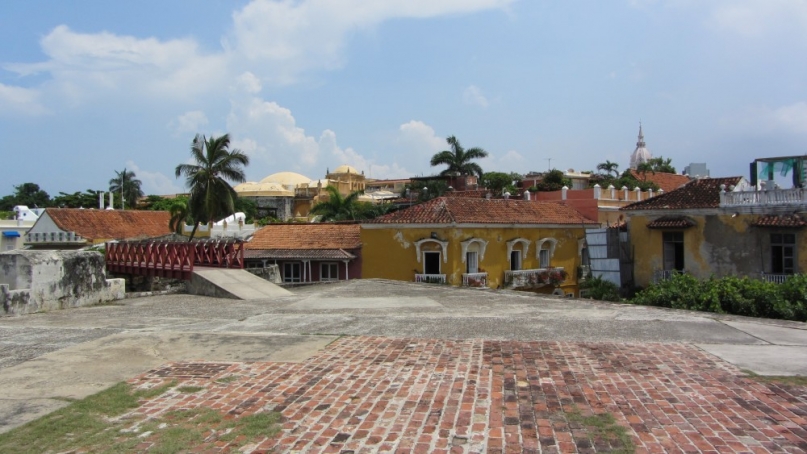 The rooftops and colonial buildings of sunny Cartagena in Colombia

Getting a bus from Cartagena (Colombia)

It’s a beautiful morning in Cartagena (Colombia) and I actually wake up in time to catch my 8:30 AM bus (this on itself is rare, I tend to dismantle alarm clocks faster than The Hurt Locker dismantles bombs, even whilst asleep!). A well-rehearsed morning routine follows. Just when I’m about to head to the terminal, I find out that I haven’t got enough cash to pay for the hostel, which means running to the nearest ATM and back. Now it’s 7:50 AM and the bus station terminal is 40 minutes away. I get on the slowest bus I can find and make it JUST in time at the bus terminal.

A particularly short man asks me where I’m going and tells me to run to a bus that’s on its way out of the terminal, but is stuck in traffic. While I’m running with my 30 kg world on my back I step in mud, lose one of my flip-flops and somehow cover my entire legs and shorts (and even a bit of my arm) in the mud. Great. I make it to the bus with one flip-flop (or is that just called a flip?) in my hand.

I quickly pack my stuff and move to the next bus, where I’m being asked to pay again. Huh?! After refusing politely, I’m apparently keeping four guys busy trying to explain myself in broken Spanish and understanding half of what they’re saying. Just to get rid of them, I pay 20,000 pesos ( a bit more than 10 dollars), which I later hear is the right fare. I realize I got ripped off on the previous trip when I tell some passengers what I paid, and they start laughing. Great. 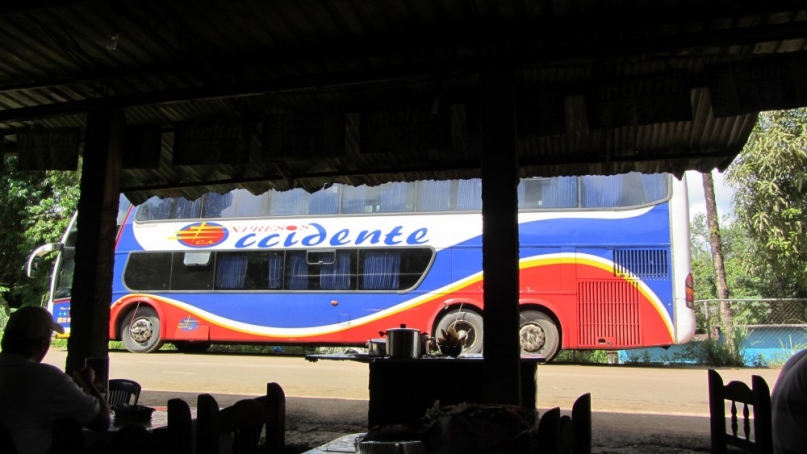 Finding a ride at the Colombia Venezuela border

The bus takes me to shady Colombian border town Maicao, where it’s already dark. I get dropped off on the side of a road and when I step out of the bus, there’s already a youngster who is carrying my backpack to “help” me find a ride to Maracaibo, a small city in Venezuela. A quick “no, gracias” gets me my backpack back, but of course doesn’t get rid of the guy. If there’s one thing I hate, it’s being pressured by someone when I’m fresh off the bus with no idea where to go.

After making it completely clear that I’m going to look for other options, I start looking for the “real” bus terminal, which seems to be close by. I take a moto-taxi, but once I get to the terminal, it’s nothing that I hoped for. First of all, it’s closed. Second of all, the only people outside are a bunch of guys with bikes, and two old American sports cars from the ‘60s.

Of course, all of the above-mentioned people are interested in trying to get some money out of the gringo-ATM. I get a bad gut feeling about the whole situation, but since it’s night now and I have no other options, I get in one of the cars. Luckily, a family appears out of nowhere and shares the “cab” with me. I feel a lot safer.

The most reckless cab in Colombia and a strip search

While on the road, I notice a few things. First of all, starting the car equals arranging some wires under the dashboard to turn on the lights, rotating a part of the steering wheel clockwise, and finally turning the key. I notice the absence of a gearing stick, and the dashboard seems to be missing a few key elements such as a speedometer and fuel indicator. Ah well, I’m sure the driver is not going to take any crazy risks with a kid in the back. 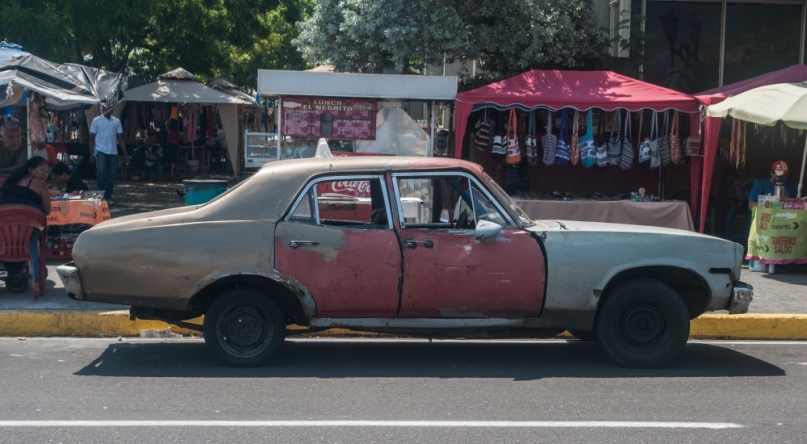 A typical Colombian Por Puesto, similar to the one that took me through the Colombia Venezuela border.

While we’re driving 200 km/h (that’s what it felt like, anyway) at night on a highway full of potholes, mostly driving in the left “oncoming traffic” lane or bluntly driving on both lanes creating an improvised “middle” lane and changing lanes unexpectedly and rigorously, I stand corrected.

The Colombia/Venezuela border procedures don’t take too long, but when I try to understand one of the Colombian border guards and use “Como?” and “No entiendo?” a few times too often, it’s apparently time for me to step into a dark, empty room, where I have to take everything out of my wallet and undress completely for a strip search. Ugh…

Six more military checkpoints follow, and since there’s a gringo in the car, at three of them we had to get all bags out of the car and taking everything out for inspection.

I felt miserable and humiliated, and the fact that the car breaks down another four times doesn’t help. Every time it feels like the car’s last breath, but our driver apparently is a magical engineer. Finally, we arrive, and luckily I’m able to change some Colombian pesos into Venezuelan bolivars to get a bus ticket leaving a minute later. The bus is freezing but comfortable and I get a good night’s sleep, waking up in Caracas the next day. It wasn’t as bad as my trip from Venezuela to Guyana, but what a night!

How to travel from Venezuela to Guyana by...

Hello, I just found out about your blog. It is brilliant that you tell about your travel experiences. I am Venezuelan and I know exactly what you went through in this borders. You did this in 2011, right now it would be 100 times harder to do it, because of the situation here in Venezuela that everyone is basically running away from the political, social and economic crisis that the country is living. I’ve always wanted to go to Guyana, Suriname and French Guiana. Countries that usually people wouldn’t think of going. My list of countries that I’ve visited is… Read more »

Hi Hector, Thanks so much for your kind words! It’s so great to hear from someone that actually lives there 🙂 I heard a lot (on the news, mainly) about the situation in Venezuela, and I can only imagine how hard it would be to travel there now. I love the unusual places on your list of visited countries! I would love to visit more of Venezuela as well as Colombia, as I feel I kind of raced through both of them. Nuuk sounds super amazing as well, it has been on my list for a while now as well.… Read more »

When did you make this trip?

I made this trip in 2011, so it is very well possible that things have changed a bit today. Definitely do your research before embarking on this trip about the current situation in Colombia and/or Venezuela.

Did the searches steal any of your stuff?

No they didn’t, fortunately. It was just an intimidating scene, to say the least 🙂

Hi Victor. I am considering doing a border run from Cabo de Vela ( but this article has me reconsidering lol). Did you need a visa to enter Venezuela? Thanks.