Home » Visit North Korea: what to expect, how much it costs, and what you need to know
North KoreaRoads less traveled

Visit North Korea: what to expect, how much it costs, and what you need to know

Aaah, North Korea. Plenty of mystery surrounds this hermetically closed-off country (also referred to as DPRK), which occasionally pops up in the international media. My curiosity got the best of me and I decided to visit North Korea on a budget tour since I was already in the area at the time. I’ll save my opinions and travel stories for another article and focus on the practical side of things in this one. How can you visit North Korea?

First off I have to tell you that I don’t work for the tour agency mentioned in this article, nor have they approached me to write this article. I’m simply recommending them to you because it was the cheapest one I could find on the internet and, after taking the tour with them, I had an honestly positive experience. 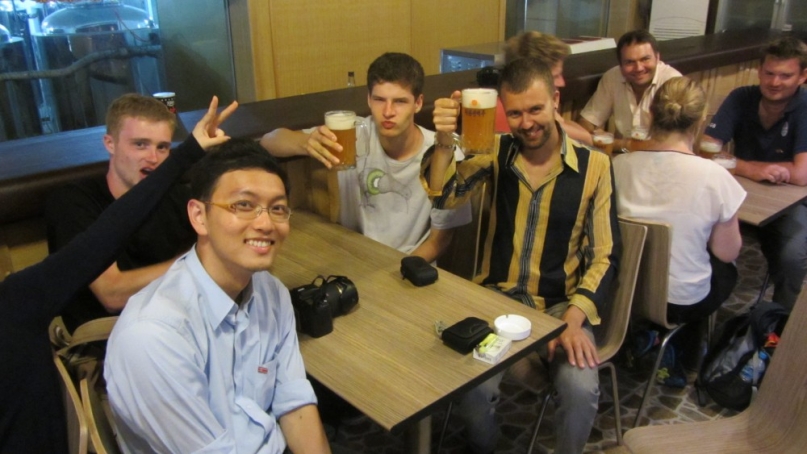 Enjoying a North Korean beer in a local microbrewery is one of the extraordinary things to do when you visit North Korea.

How much does it cost to visit North Korea?

At the date that I’m writing this article, it is not possible to travel to North Korea as a solo traveler so you will have to find an agency to organize your DPRK tour. They will arrange a visa for you and create your itinerary (some agencies don’t charge any extra fee for arranging the visa apart from the actual cost, which is around €50). After looking at the options I got through recommendations and research I found a few agencies.

The agency I chose, Young Pioneer Tours, offered a 2-day visit of North Korea’s capital (Pyongyang) for €395 (update April 2018, this is now €445), including train ride to and from Dandong (a border town in China) but excluding the visa costs and Mass Games ticket (around €80 for good enough seats; more about this later on in this article). This was the cheapest option I could find and I was lucky enough that the date I booked was also a North Korean National Holiday: the 65th anniversary of the Democratic People’s Republic of Korea. Another reason I booked with these guys is that they boasted to have “group tours for people who hate group tours” and well, I do. 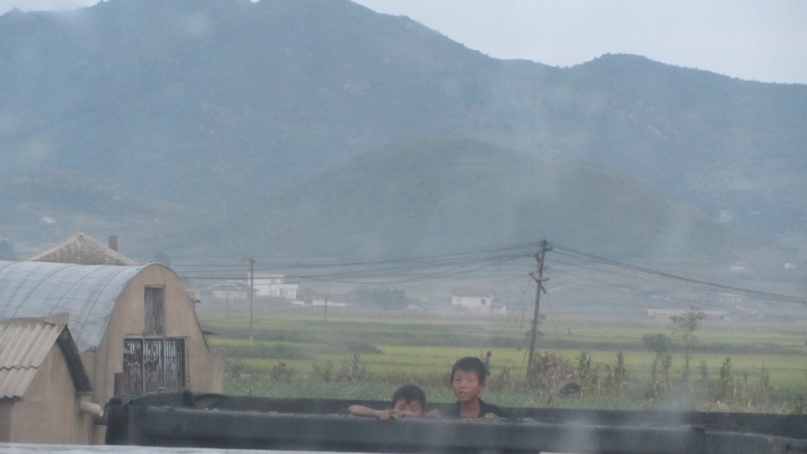 Checklist for your North Korea visit

After sending them an email I got a quick response and we sorted out the details pretty quickly. There were a couple of pointers:

The pre-tour deposit is 40% of the total amount and there are two simple documents you would have to fill in to apply for the tour and visa. Additionally, a proper passport picture (with white background) and a copy of your passport’s photo page have to be provided. If you’re working/living in China, a copy of your Chinese visa would be necessary as well.

That’s practically it! Once you can follow these rules your North Korea tour will go smoothly as eggs, even for Americans! 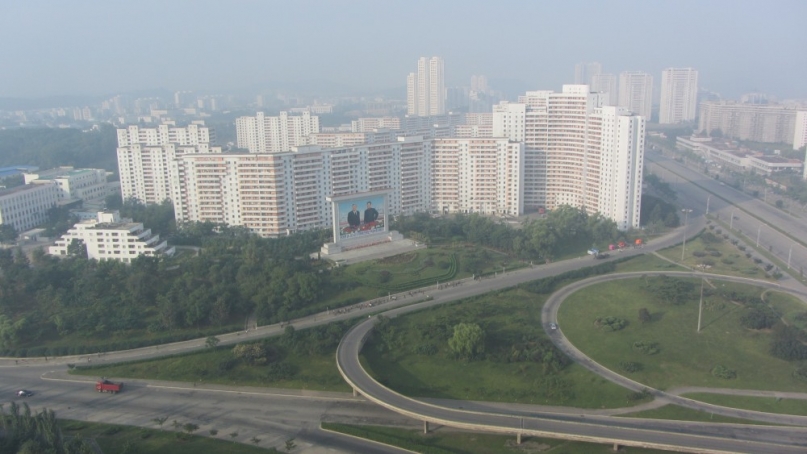 Pyongyang as seen from my hotel room window

You will meet your tour guide and other tour members in Dandong, and there will be time for some food, drinks and a dive into the exhilarating nightlife. Scratch that last part; there are literarily zero fun things to do in Dandong unless you don’t mind fighting off a herd of karaoke-girls and a small man that calls himself a security guard. Yes, that actually happened. 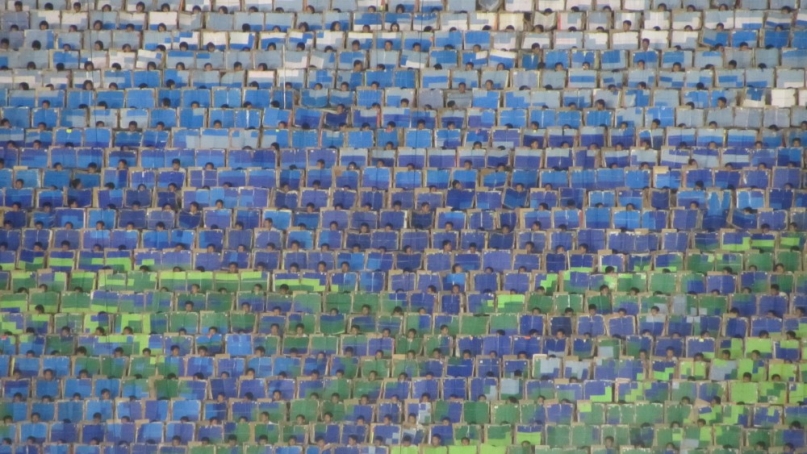 One kid represents one “pixel” 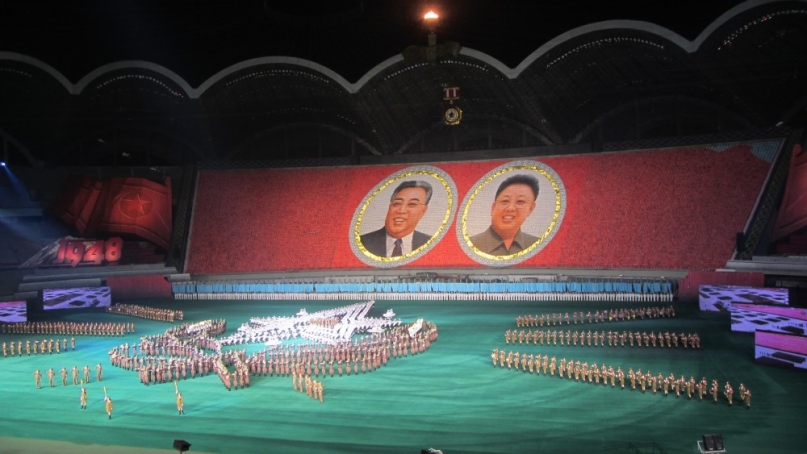 The Mass Games is the spectacle of performing arts and gymnastics which involves synchronized movements of thousands of participants, mostly kids. You might remember it from Faithless’ video clip of “We Want More” (below). The price of a ticket isn’t included in the tour but is 110% recommended to buy. Prices vary per “class”, but a regular 3rd class ticket is around 80 euro and has a good enough view.

The show is truly breathtaking, and the discipline and determination the performers show is out of this world. It feels like you’re watching a live animation, especially with the backdrop of 1000’s of kids holding big books with single colored pages which they turn over when told to. This creates a pixel-like effect and looks pretty unreal when viewed from far away.

I wrote a separate article about my visit to the North Korea Mass Games in 2013 with loads of pictures and videos, so if you’re interested in this subject, be sure to have a look!

Reflecting on my trip to North Korea

I didn’t read any books about North Korea before entering the country and I didn’t really follow the news closely either. As with any other country I visit for the first time, I want to have a clear mind without expectations. After visiting the country I can make up my own opinions and base them on the things I’ve seen and done. This wasn’t any different with North Korea.

After visiting the country I have read the book called “Nothing to Envy”, by Barabara Demick, which tells the stories of people who lived their whole lives in North Koreans but chose to escape. The book certainly provided some perspective to the polished tours, since it also talks about the life in other cities which your not allowed to visit as a tourist, like Chongjin. (edit: I found out that this is a common misunderstanding. It’s actually possible to visit other lesser known cities like Hoeryong, Rason, Chongjin, Kaesong, or one of the mountain areas. Also, you can visit North Korea as often as you want, not just once).

The visit definitely made a mark on my 7-month world trip, and I still haven’t finished processing all the things I’ve seen and heard. As much as I want to express all my feelings and opinions about North Korea in this article, I will contain them for another one. 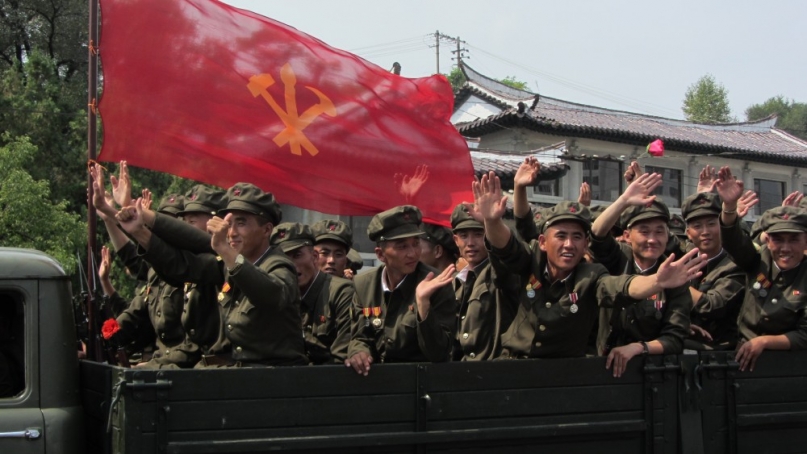 Should I visit North Korea?

Yes. I believe you will have a unique experience, which will score you some points with your kids, grandkids or random girls at a bar. Hell, you could even bring your kids with you! The country is completely safe for travel, as you will not have any (unsupervised) contact with the locals. Furthermore, the locals that you will meet will be friendly and welcoming.

There are loads of souvenirs you can buy such as pins, postcards, and books. Personally, I think that a short DPRK tour has the best value. Since you will not be able to wander around freely you will be “stuck” with your tour group for all the days of your tour. This wouldn’t be a problem in my case – I had the best tour group I could wish for and I’m still in touch with some of them – but you never know who will be in yours.

It’s a crazy world out there, which you simply have to see for yourself before the borders open up.

As an extra special bonus for you, the much-appreciated reader of my blog, I’ve asked Young Pioneers if they could offer a little gift if you would decide to book a tour with them after reading this article. They happily agreed, and all you have to do to receive a goodie bag (which includes a t-shirt) is mention my blog when you contact them (“Victor’s Travels”, remember?). You can see a list of their tours, prices, and availability on their North Korea tours page. Don’t forget to write me a postcard 😉 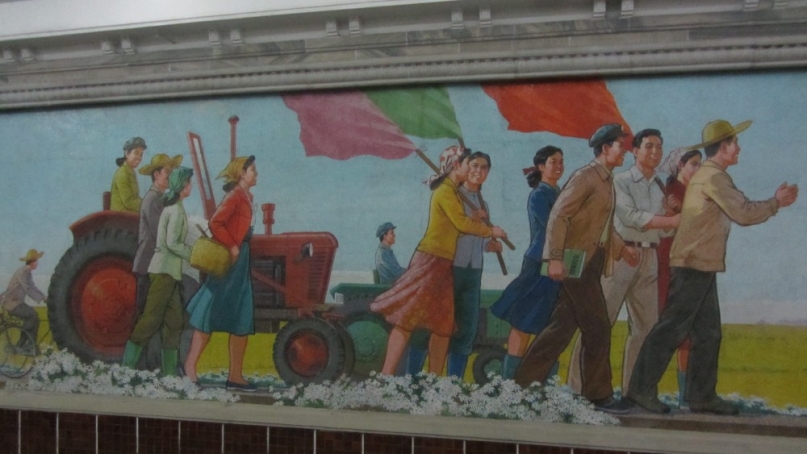 A propagandist wall mosaic in the Pyongyang underground metro

Hi, I interest to visit DPRK/North Korea. But I am moslem woman and wearing hijab/scraft. Can I visit DPRK with my situation?

Hi there Maya,
Hmmm, that’s a pretty specific question. I think it’s best to ask this to a specialized agency who know’s what the latest developments are in the DPRK. How about getting in touch with Young Pioneer Tours? Hope that helps.
Victor

Most prices quoted in travel articles on the DPRK are absurdly expensive.
How about a trip that’s practical?
Train from Dandong.
Stay in cheapest hotel.
See no sights – just walk around with your 2 necessary minders witnessing people in a veritable urban concentration camp. Unmatched in the world probably. Buy food in markets/stores.
Make it as short as possible.
Just a few hours there would blow people’s minds.

I’ve been there as well (for 8 days though) and I agree with Victor completely! It is a beautiful country and it is certainly worth to go there yourself!

It’s also quite different than the one-sided view you get because of the media.. Definitely agree, everybody should check it out!