Kuna people: the mysterious tribes of the San Blas Islands in Panama

When faced with the options to cross the Darien gap between Panama and Colombia (too dangerous to go over land due to rugged terrain, robbers and guerrilla camps) your true traveler spirit will arise. Will you take the safe flight or luxurious sailboat, or will you take the shady cargo boat that will leave today (or tomorrow) and will probably arrive at its destination four, five or maybe nine days from now? You guessed it right; I wouldn’t have written this article if I had chosen one of the first two options. This is the story of my visit to the San Blas Islands in Panama and getting in touch with the Kuna people. Let the adventure begin. 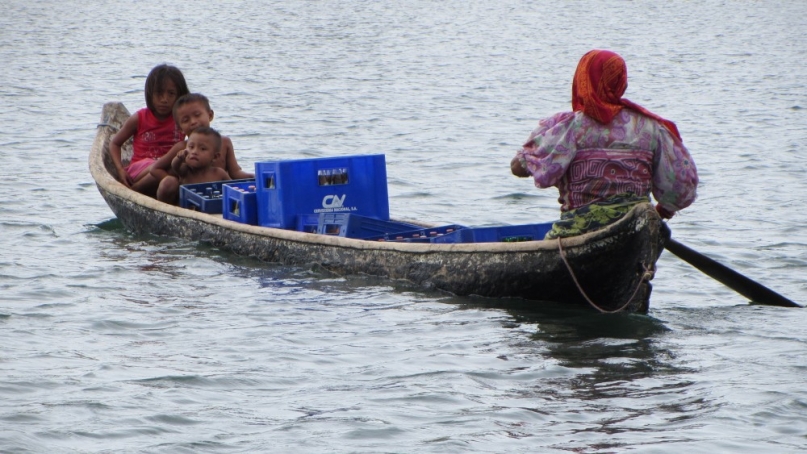 After hitchhiking from Panama City, we (fellow traveler couple Dominik from Switzerland and Carolina from Germany) arrived in the tiny harbor of Miramar hoping there would be a cargo ship to Colombia leaving anywhere soon. Asking around in the village pointed us to Marcello, the owner of a ship supposedly leaving the same day. “I leave tomorrow at 6 am”, said a grumpy Marcello, and added: “no, you can’t sleep on my balcony, there is a hotel nearby”. Do we want to spend 9 days with this guy? After a not entirely convincible consensus, we decide to hop on. 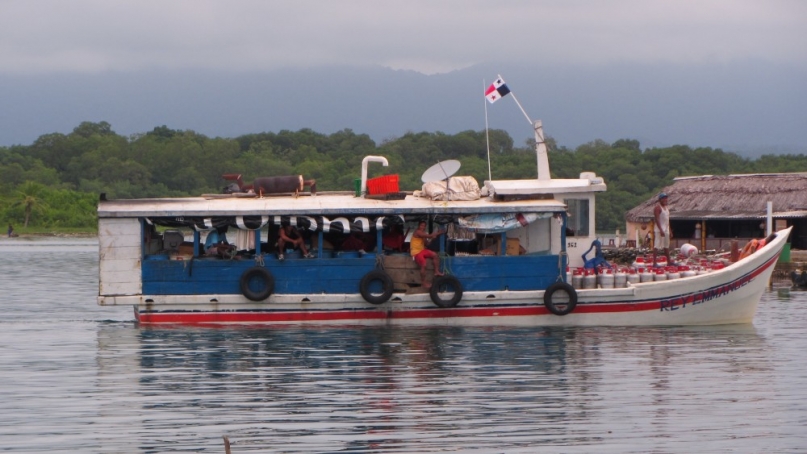 The boat in question

The next day, involuntarily waking up at 5 am, we are ready for the days to come. We jump on the boat and answer the few questions the crew has for us: “what’s your name”, “where are you from” and “where are you going next?” Time passes. 1 hour, 2 hours, 4 hours. Finally, after waiting for any kind of pre-trip preparations to happen, we turn to Marcello to ask what’s going on. “Tomorrow at 5 am, there’s bad weather today”, is his simple answer.  Can’t this boat handle the 2 drops of rain we see?

The day after, even more involuntarily waking up at 4 am, we jump on the boat again. Finally, after 3 hours of “tranquillo”, the key in the ignition is turned and we are on our way.

The Kunas noticed they were harming the island by building, farming and living on it 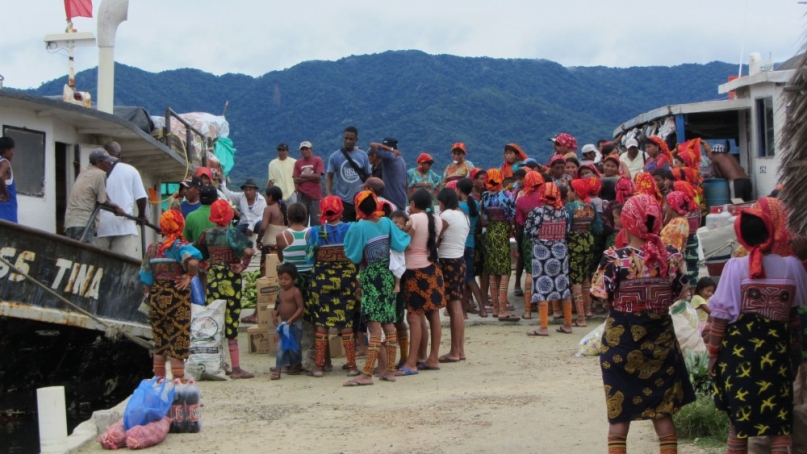 A group of Kuna people gathered by the cargo boat 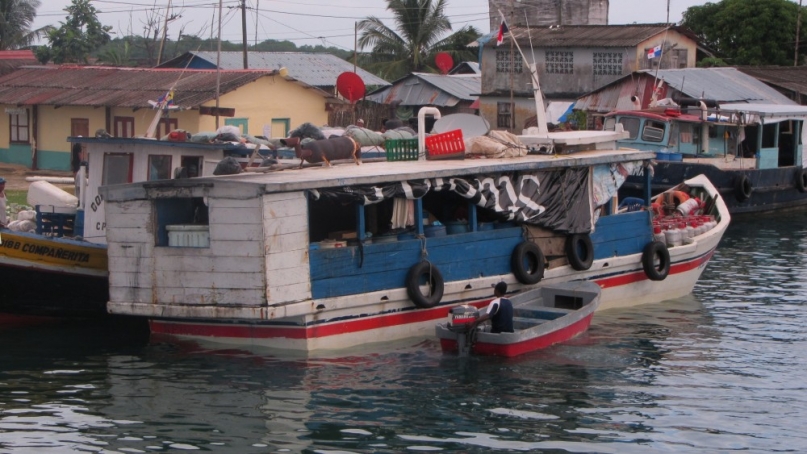 The first (of many) San Blas island

After 3 hours of holding back seasickness, we arrive on an island called “El Porvenir”. It’s cute and as big as a soccer field. An administration employee types up a low-tech (and I mean typewriter low-tech) letter, which grants us access to the San Blas Island group. On the way to the next island, we see lots of islands that would be framed best on one of those tacky “standard Caribbean Island” poster.  You know, bright yellow beach and a couple of coconut-rich palm trees. So far, so good. 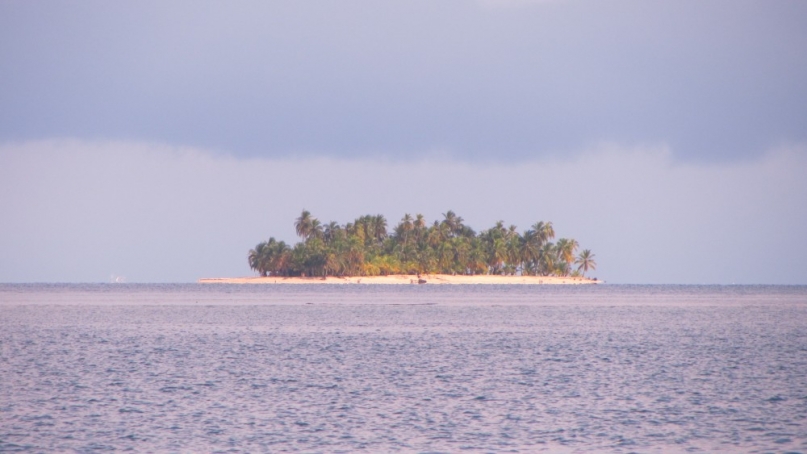 One of the thousands of San Blas islands 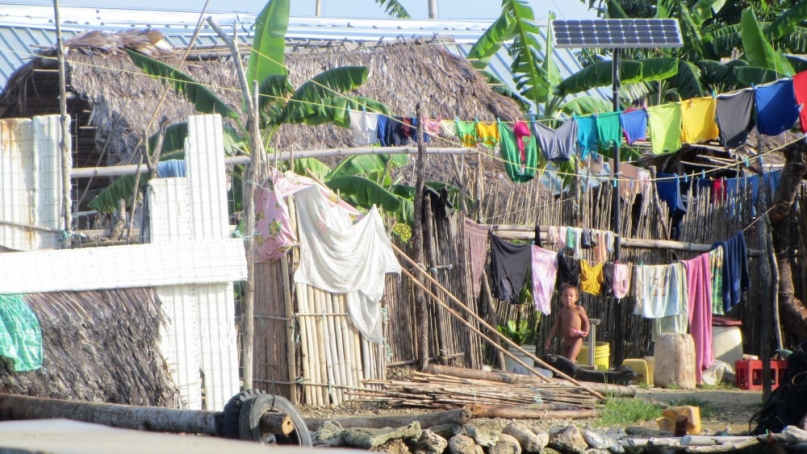 While the crew is loading and unloading goods on the next island we decided to take a stroll on the island where we see a different world, one of the Kuna people tribe, which consists of almost a hundred communities living on several San Blas islands. Their lifestyle is primitive: houses made of bamboo, no electricity, and traditional households.

We are greeted by a Spanish speaking man, let’s call him Donaldo, who turns out to be the Secretary of the Committee of Kuna Community Representatives. Donaldo explains: “After 500 years the Kuna people community on this island, Isla Soledad Miria, is moving back to the Panamanian mainland. This will take three years and has a few reasons:

Firstly, the Kuna people here are facing expansion problems. There is simply no more space on the island, and it costs too much to expand in any way. 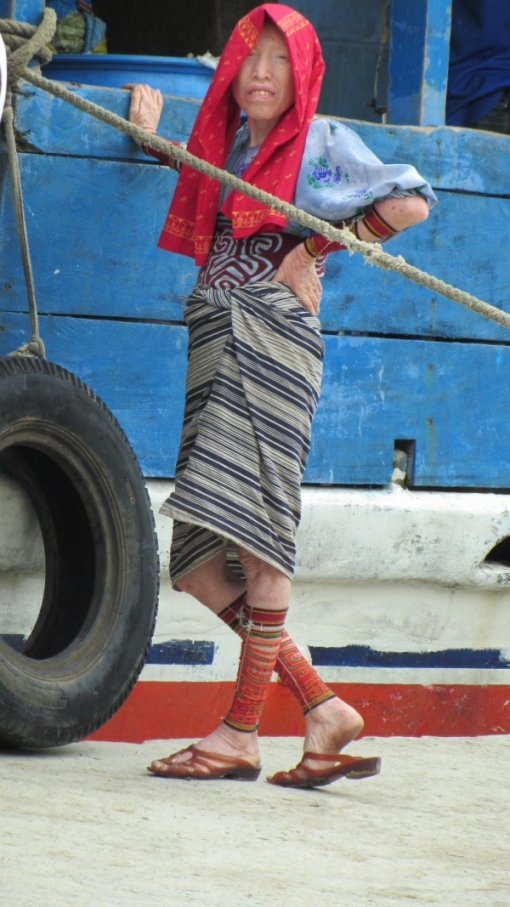 A disturbingly high amount of Kuna tribe members was an albino

Secondly, the Kuna people noticed they were harming the island by building, farming and living on it (author’s note: *cough* and their habit of throwing all their trash in the sea *cough* It seems I was a bit too quick to judge here, in a conversation about this years later I found out that the lack of a proper trash disposal system is more to blame than the islanders themselves).

Finally, we noticed the effects of global warming, shrinking the island a little bit more every year”. The last point made us giggle a bit: who would have thought the people here would notice let alone act upon global warming! What surprises us, even more, is that Donaldo’s office recently installed solar panels on several islands powering a network of low-energy streetlights. The sight alone is amazing: a shabby bamboo hut with a solar panel on its roof.

You want food? Come get it when it’s ready. You want to know when we’re leaving? Hop on the boat when the engine starts. Want smalltalk? We’re not interested. 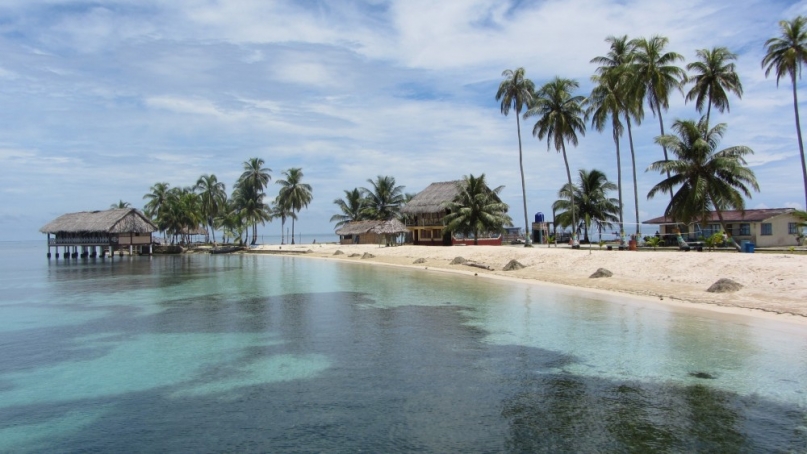 One of the thousands of San Blas Islands 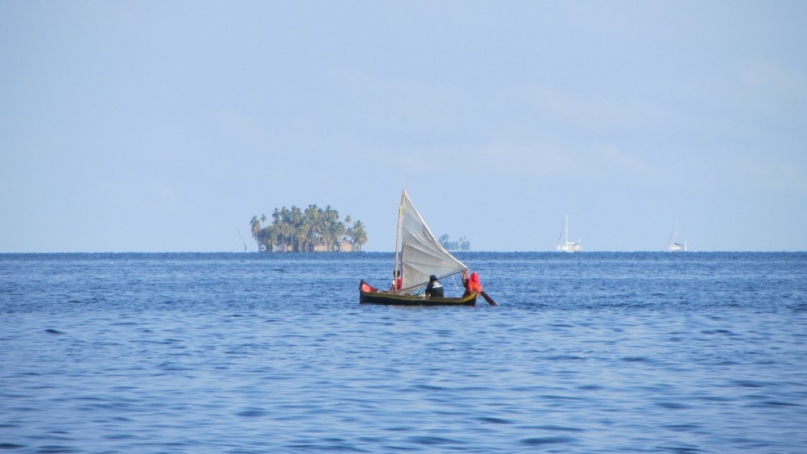 Simply put, there is hardly any difference between the islands. The level of development and civilization varies a bit between the islands, but the main concept stays the same. We develop a routine, which we continue to follow until the end of the trip (in chronological order): 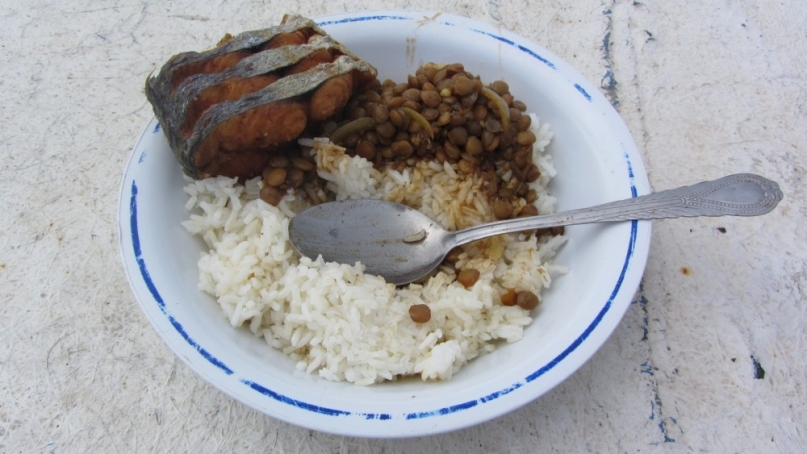 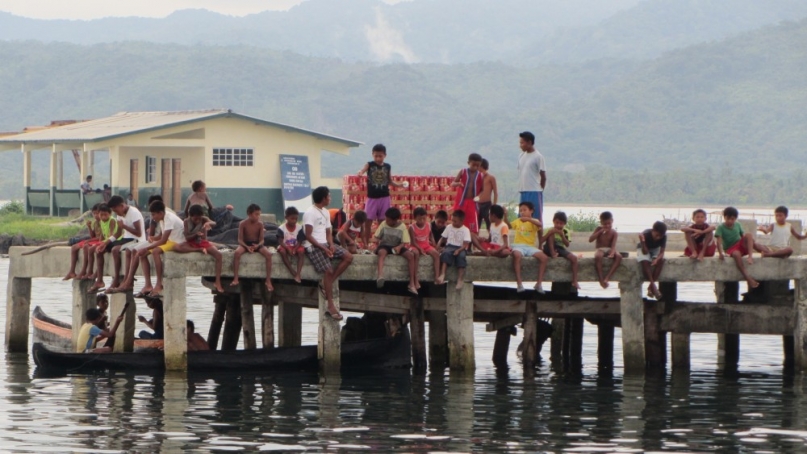 How was it to spend 8 days on a shabby boat?

Not easy, simply put. Bedtime is a few hours after the sun sets, which is usually around 5 pm. After being lulled by a symphony of farts and snores (and a guy throwing up), a night of bad sleep on a bone-crushing wooden floor underneath the crew’s hammocks awaits. A “get up, foreigner” is your friendly wake-up call at 6 am.

Breakfast, lunch, and dinner is served, which is a random combination of the following: potatoes, chicken, fresh fish, pork, rice, platanos (a kind of banana tasting like potatoes), sausages, eggs and the occasional chicken foot or heart. Note that all meat (except for the fish, which is caught straight off the boat) is bought before departure and is stored in a huge ice-filled “cool”-box. This obviously turns into a lukewarm box of water on day 3 but is disgustingly enough not refilled with ice. Sitting and waiting are your main activities on the boat. Sleeping is not far behind. 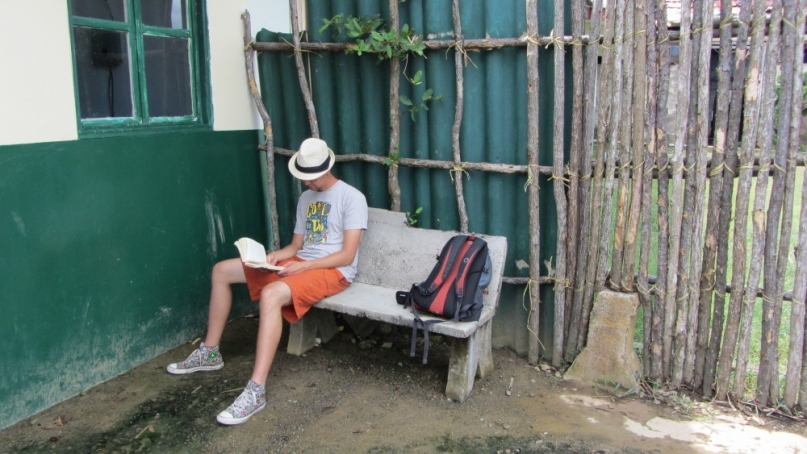 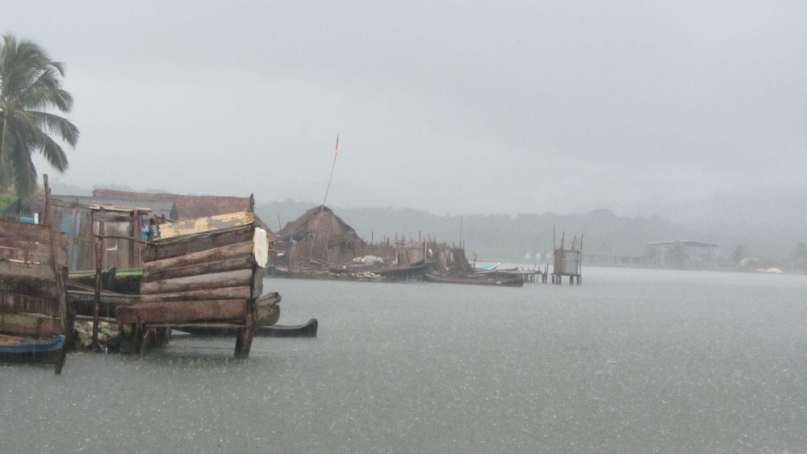 Moments of absurdity followed by moments of happiness

Naturally, looking at the horizon to see a thunderstorm building up while being surrounded by barrels of fuel and dozens of full gas bottles makes you think about the facts of life: “Why have I seen 18 albino Kuna people in the last 6 days while I only see 1 albino every 4 years back home?”, “Are these dolphins swimming in front of our boat real or am I hallucinating?” and of course “What time, date or year is it?”.

On a more serious note, this is an experience I will not forget soon. It consisted of moments of absurdity followed by sheer happiness. I want to thank Carolina and Dominik for leading the way towards this adventure, and always stepping up when there was a problem. You guys truly have a traveler’s soul. 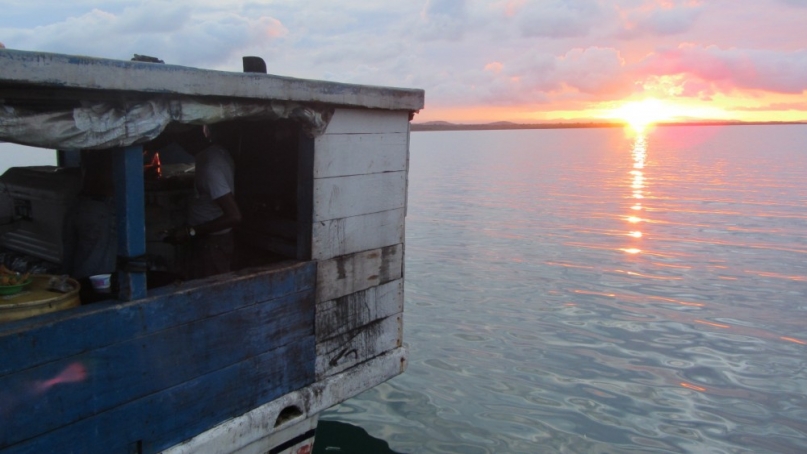 Sunset from the cargo boat 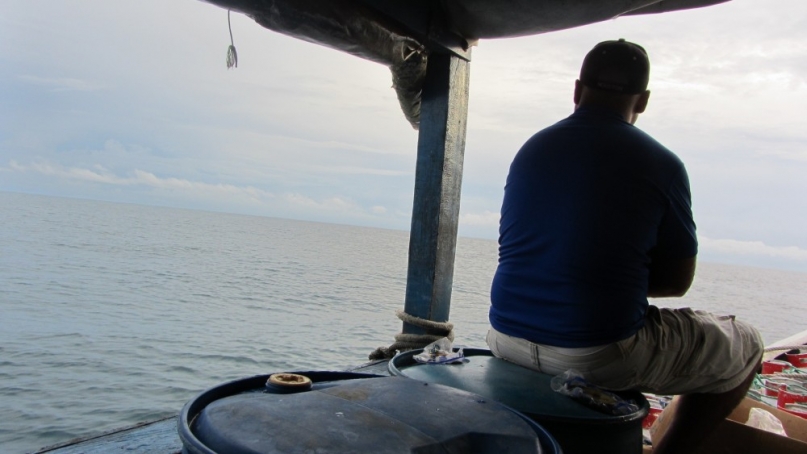 Our captain on the Kuna cargo boat 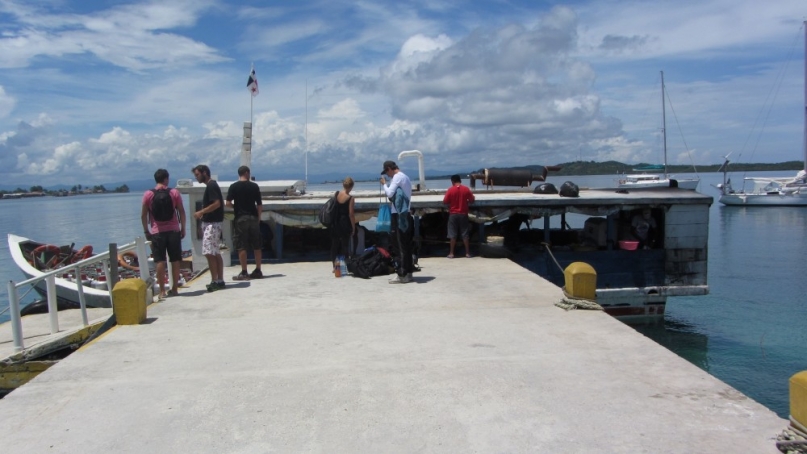 Offloading cargo.. This could take up to an hour 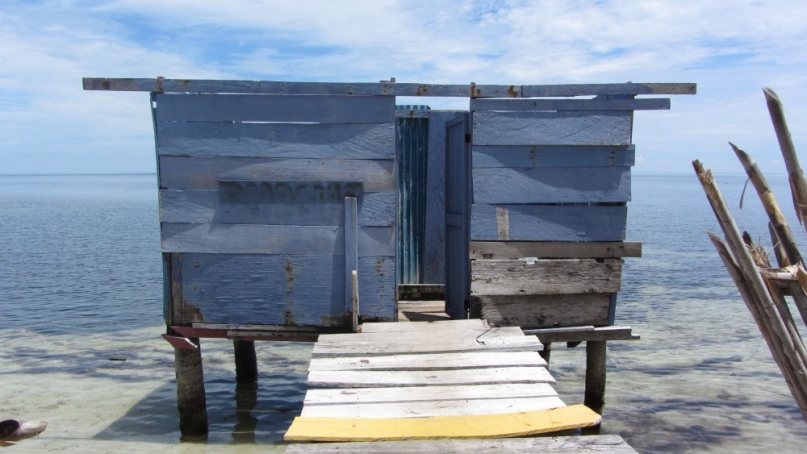 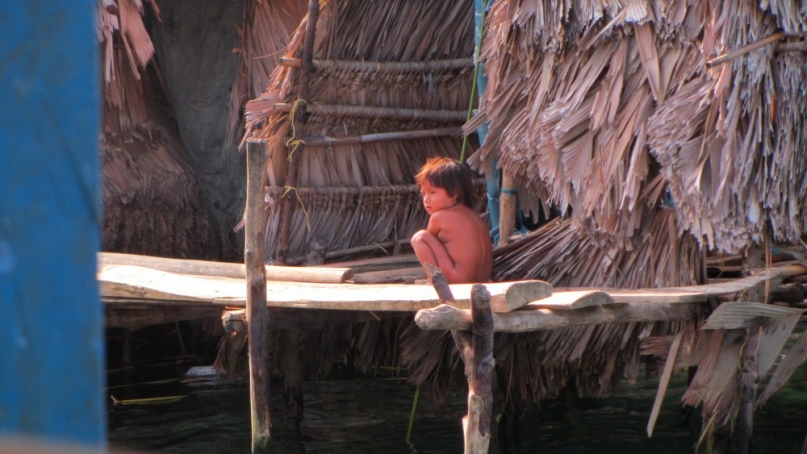 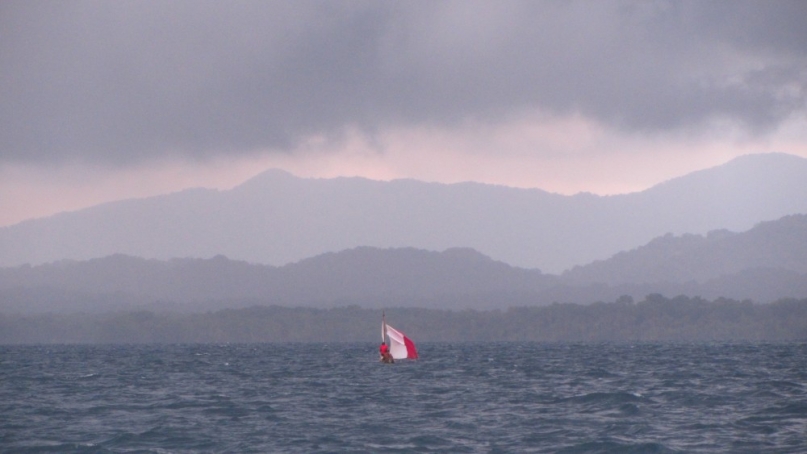 Life in China through the lens of a...

What an adventure you leaved !! I m very pleased that you’re writing down those stories now… very inspiring for me !
See you in Europe !

Thanks Nicholas! I’ve got plenty more adventures which I still have to write about, so keep an eye on the blog 🙂