It’s easy to lose your head with all the things to do in Dubrovnik, the famous Croatian seaside town boasting a medieval walled-in ‘old city’. Busloads, or should I say cruise-loads, of tourists make a day-or-two stop here, causing it to be flooded with people for a big portion of the year. My girlfriend Claire and I visited Dubrovnik early June, and since we were (not surprisingly) on a budget we looked at what to do in Dubrovnik without spending a ton of money.

To give some perspective, all of the activities below can be done in a single day. I, therefore, wouldn’t recommend to stay in Dubrovnik for longer than a full day and to only spend a night there if your transport schedule doesn’t permit otherwise. Here are our recommendations on what to do in Dubrovnik:

Not one, but two ginormous cruise ships welcomed us at the Dubrovnik harbor.

What not to do in Dubrovnik: Don’t take the cable car to the top of the hill

Does 15 euro sound like a reasonable price to be stuffed in a tourist-filled air-bucket that takes you up a hill in a couple of minutes? Of course not. It’s so packed, you might not even be able to look out of the window! A better option is to walk up the hill. There is a beautiful and not too hard path leading all the way to the top, with spectacular views of the old city at every bend.

What to do in Dubrovnik: Do hike to the top of the hill on this not so well-known pathway

As this path is mostly not covered by trees, you might want to start early or late in the day. The pathway is well kept, and you’ll meet some friendly fellow hikers on the way. As a bonus, there are tablets of Jesus Christ’s crucifixion at every bend, telling the story from start to finish.

Claire dance-hiking up the first bit of the pathway 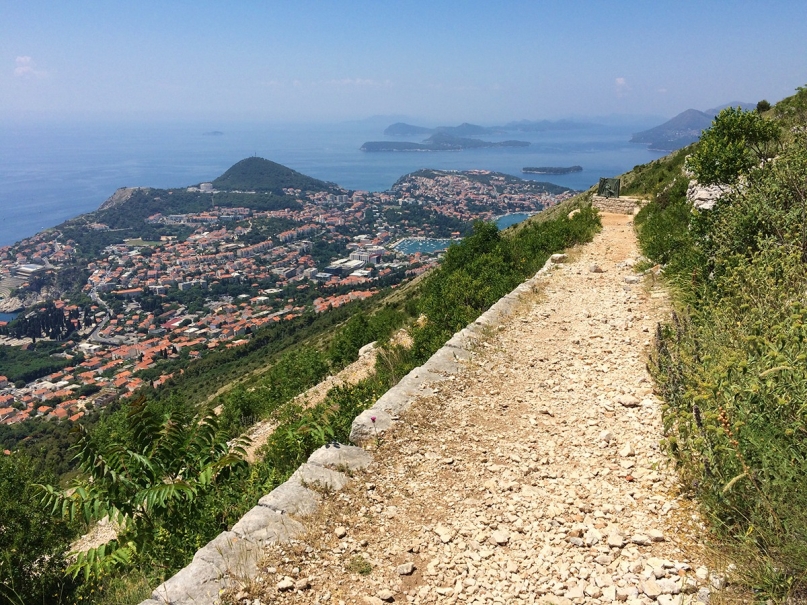 The view from somewhere in the middle of the hike. It gets better, but I don’t want to spoil it for you.

You can find the entry to the pathway here: 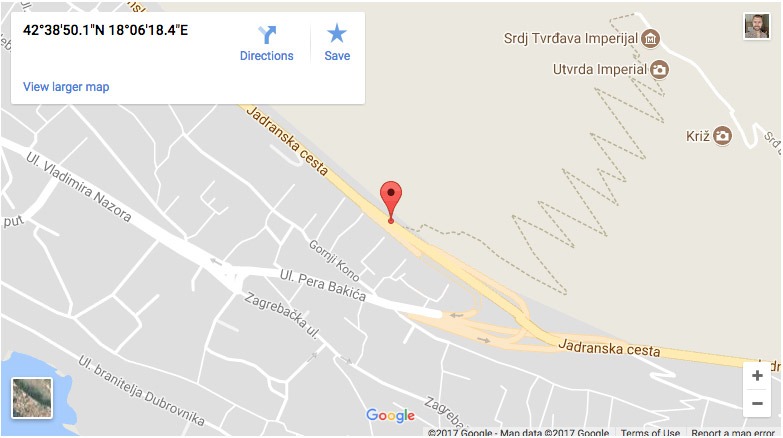 Since this is next to the main road with no pedestrian paths, it is best accessed via Pera Bakića road. Simply take the stairs going up from the point shown on the map below. It’s quite a couple of steps, but you will eventually reach the main road and the entrance of the path.

The stairway that brings you to the entrance of the walkway

If you’re into Geocaching: there is a nice cache underneath the viewing point with the big white cross. View the cache on geocaching.com.

The geocache in question.

If it’s on your bucket list, go for it. If you’re not on a budget and time it right, go for it. In any other case, it’s better to get your food outside the old town. Sure, a lot of the restaurants might look like the most romantic places you’re ever seen, but that quickly wears off after you’ve seen the menu prices and noticed the ignorance of your fellow diners.

Plenty of waiters around to lure you into one of the fancy restaurants.

I can honestly say that seeing Dubrovnik’s old town for the first time certainly wowed me. The vast and well-preserved structures have something truly magical to it. If it weren’t for the pesky tourists, of course. Strolling inside the old town is enjoyable, but make sure you don’t just follow the hordes. There are plenty of cute alleyways and cobbled streets where you’ll feel equally medieval, just with fewer people (or even none!) around you. Some of the restaurants mentioned in the previous paragraph have live music, which can be just as pleasantly enjoyed from a fountain or doorstep nearby, for free. 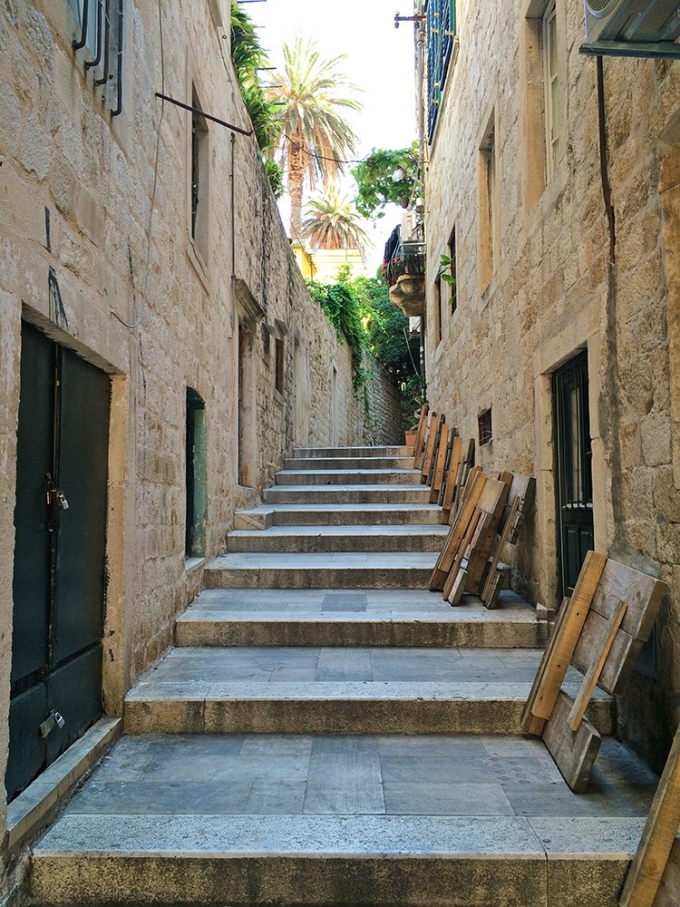 An alley in the old town of Dubrovnik

Nothing screams tourist more than going on a Game of Thrones tour in Dubrovnik. For those who have been living in a dark abyss for the past few years: Game of Thrones is an HBO series about tits, horses, and some other stuff in medieval times. One of its settings, King’s Landing, is largely filmed in Dubrovnik, making it a huge tourist attraction with souvenirs, living statues, and tours to visit the filming locations. Neat, but not for €25 (or even up to €100!). Especially when there is an easy way to do it yourself, thanks to the efforts of a fellow blogger.

“Nuuuhh nuuuuh nuh nuh nuuuuuh nuuuuuh nuh nuh nuh”. I think we all know the lyrics. One of the funniest things I encountered was when I peeked through the window of one of the houses in Dubrovnik’s old town, only to see that the person was watching Game of Thrones. Inception much?

Anyway, thanks to blogger Erik you can find a few of the most-known film sets used in the Game of Thrones episodes yourself and therefore create your own private tour.

With this, a dilemma arises: to climb the ancient city walls or not? It’s a pricy 100kn (14 euro) to get up there, and you can see most of the old town, and the scenery from the ground level or the pathway up the hill (see the earlier point about hiking up the hill). Since I decided not to climb the wall, I can’t say if it’s worth it. I would love to hear your opinion though!

In a touristic place such as Dubrovnik, you can expect the worst when it comes to hotel prices. Supply and demand, and all that. Even hostels start at about €20 per person per night. A better option would be to try Couchsurfing or to find a place with Airbnb.

Do try Couchsurfing or Airbnb in Dubrovnik

Although you have to be very lucky to get accepted as a couchsurfer in Dubrovnik (locals will get over 30 requests per day), it’s worth a try. If you’re out of luck, go for the next best thing: Airbnb. I found a double room for 19 euro (total) which had an amazing view and was walking distance from the old town. 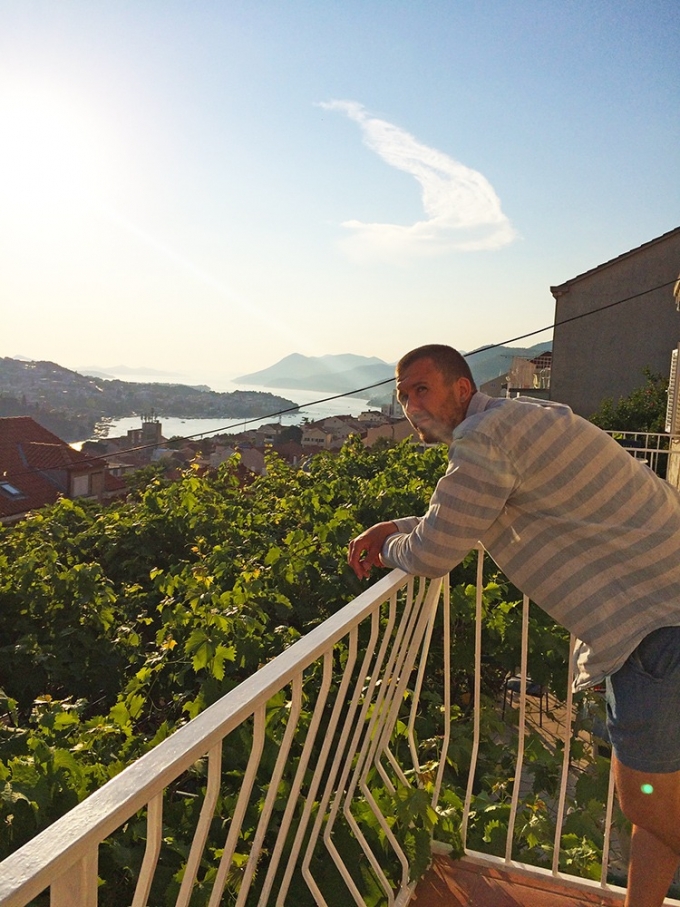 The view from our Airbnb spot in Dubrovnik. 19 euros per room ladies and gentlemen.

Awesome, thank you for the tips, the path up the hill sounds neat. A few corrections though: “One of its settings, King’s Landing, is based on Dubrovnik.” King’s Landing is not based on Dubrovnik, not sure what you mean by that, but in the first season it wasn’t even shot there but on Malta. “A few shots have actually been taken at the place itself, making it a huge tourist attraction to find out where they are.” It’s not just a few, it’s nearly all King’s Landing outdoor scenes starting from season 2, and also many from Qarth, too. Honestly,… Read more »

Thanks for the corrections, I have updated the article 🙂
Hope you have a great time in Dubrovnik and manage to see all the cool stuff!

Hello Victor! Thanks for the very good tips, I’m going there for the third time now in May. Lisse-Lotte still talks about the wonder you did to her webpage!
All the best
Daninge

Very nice to hear from you! Croatia is such a wonderful country with so much to offer! I hope you and Lisse-Lotte have a great time there and that my tips will be useful. Great to hear that she is still happy with the website! 🙂

Love it! Your way of traveling is in sync with mine! We actually are on a tight budget, but that makes us take different paths than the usual tourist circuit (i.e. walk to Srd instead of the cable car). The pictures are excellent! Keep traveling!

Thanks MJ! Traveling on a tight budget makes you so much more creative 🙂