Home » Mini stories 4: A postcard from the coldest place on earth
Antarctica

Mini stories 4: A postcard from the coldest place on earth

People sometimes ask me: how was your trip to Antarctica? I never really have a good answer. Words, or even pictures, don’t do it justice. For a recent writing competition for travel bloggers, I decided to give it a shot. Taking up a more narrative writing style as opposed to my often-used descriptive style, I tried to paint a picture of my experience in words. After a call to vote via my newsletter a lot of readers did, and I thank them dearly for it! The result? Even though I didn’t win, I got an honorable mention from a panel of 20 judges and 155 entries. Yaay! 🙌 Inspired to plan your own Antarctica trip (on a budget)? Check out my thorough guide on how to visit Antarctica by boat or plane. 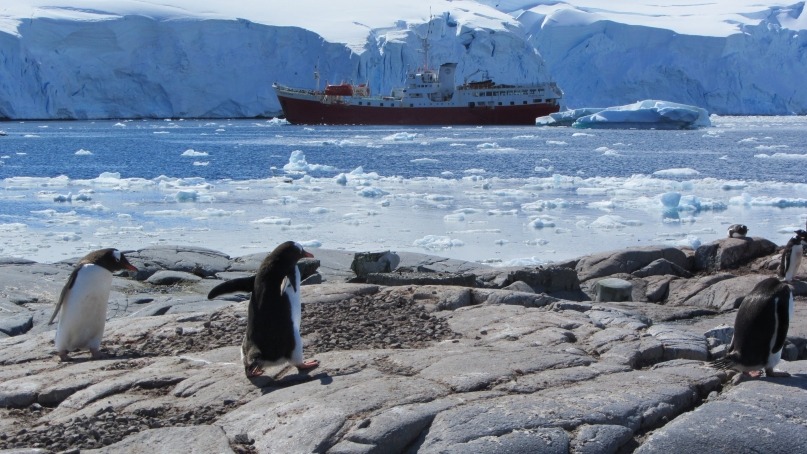 Playful penguins with our vessel in the background

A postcard from the coldest place on earth

Deciding whether to hitchhike to the moon (seriously; I emailed commercial space flight agencies and everything) or to travel from the North Pole to the South Pole was hard. I was 26 and, after a previous 6-month backpack trip, had seen the light: everything is possible.

But, if everything is possible, what will I choose to do? My first plan seemed a bit too ambitious at the time, so North to South Pole it was. It was a trip of a lifetime, and it was then that I got acquainted with my favorite place on Earth: Antarctica.

I mean, my trip provided enough material for comparison: the lonely wilderness of Alaska, the extensive salt plains of Salar de Uyuni in Bolivia and the colorful wildlife of Costa Rica, to name only a few examples. But Antarctica is something else. 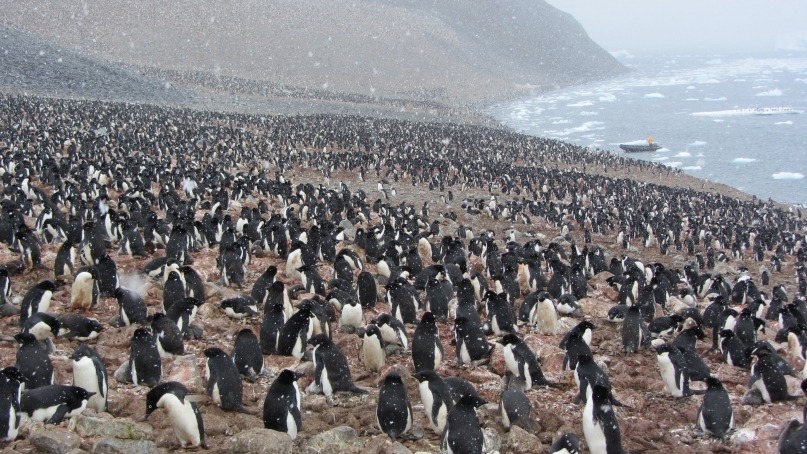 One of the most impressive sights I have ever seen. Thousands of breeding penguins on the Brown Bluff island

Antarctica is the coldest, windiest and driest continent on the planet, and it’s bigger than the U.S. The most common route for visiting this marvel is via a place called Ushuaia, in the southern tip of Argentina. You can either fly or take a boat. The latter takes you to the tip of the Antarctican peninsula in a day; the former takes just a few hours. My plane landed on a make-shift gravel airstrip on a former Soviet base. I got on a medium-sized boat called Antarctic Dream. My adventure began. 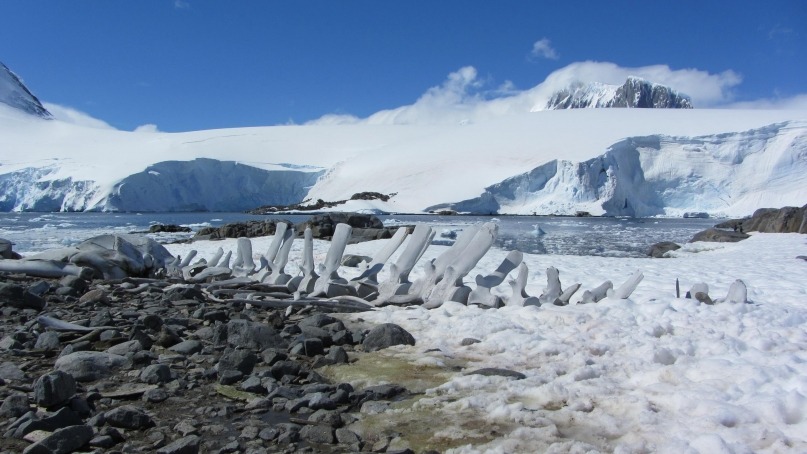 A whale skeleton on Antarctica

It was the sternness of the silence that I noticed first. No traffic, no ringtones, not even the occasional bark of a dog.

Our first landing was on an island called Brown Bluff. The silence was rudely interrupted by not 1, or 10, but 20.000 loudly breeding penguins. Literally everywhere I looked I could see, hear, and smell (there was penguin shit everywhere) the lovely little creatures. And they’re super nosy, too!

Back in the Zodiac (a small rubber boat), and back on the boat. We’re soundlessly floating again, past moaning icebergs higher than an elephant stacked on a double-decker. 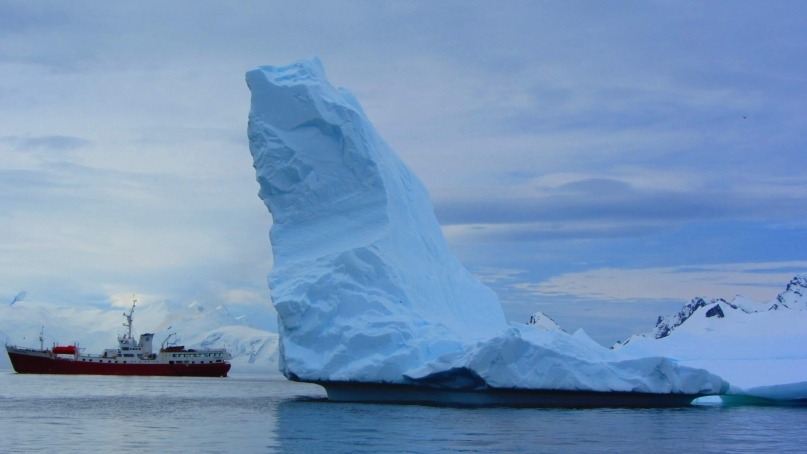 I ran across some gigantic ice sculptures, which are sometimes hard to judge in terms of scale.

On the next landing, I step on the actual landmass of the continent for the first time and hike to a nearby vantage point. The view is mesmerizing, depicting a miniature world with a red toy boat among the dominant white mountains. On the way back, the boat gets bigger and bigger again, until we’re making our way through the floating pieces of ice.

Then, a curious red and black building with a British flag appears. It turns out to be a military station founded in WWII and currently serving as a museum and post office. A post office! In Antarctica! It truly blew my mind. I learned that a small team of staff operates this charming base for 6 months a year, and, sure enough, you can actually send a postcard home. Meanwhile, a big piece of ice breaks off nearby. 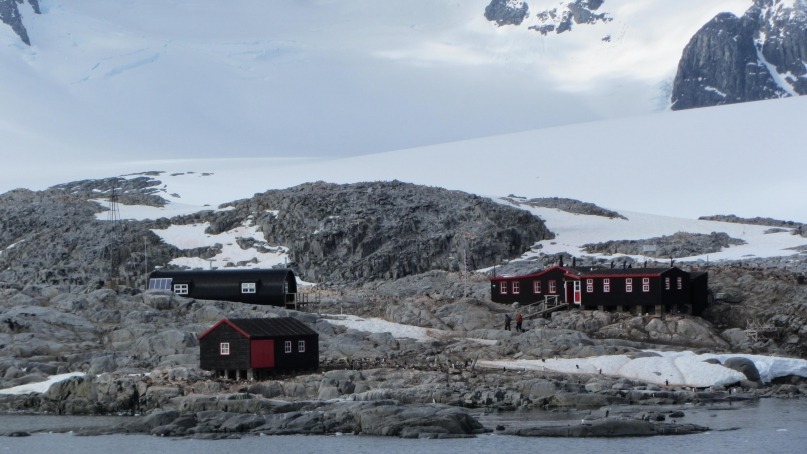 Every place I visit on our route is immersed in history. Structures were raised to accommodate the rising whaling industry, or as strategic bases in the Second World War. Since Antarctica has been protected under a treaty since 1959, many of the old buildings are still present, be it rusted, windswept and partially swallowed by the earth they stood on. 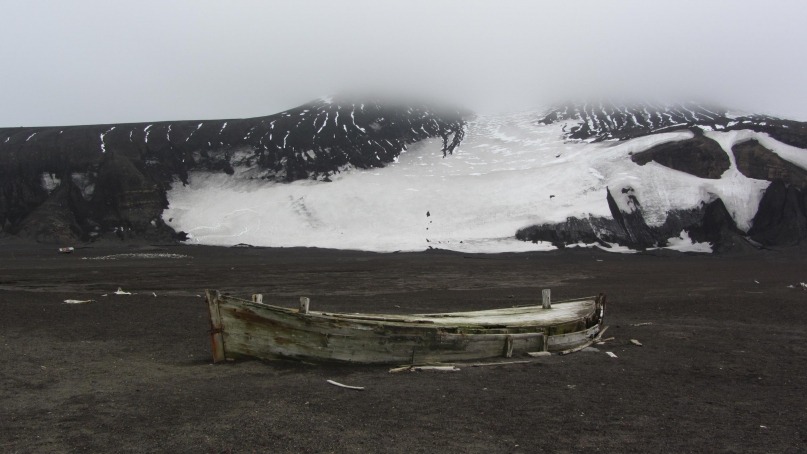 A stranded boat, one of many rusty, windswept weathered wooden structures on Antarctica

As my STTTD (Stupid Tourist Thing To Do), I ran into the Antarctic water for a very brief swim. It was cold, of course, but the adrenalin (and vodka that was afterward provided by a Russian fellow passenger) made it bearable. I guess it gives me something to ramble on about when my daughter is a bit older.

We loop back and conquer the turbulent Drake passage between Antarctic and Argentina, and suddenly I remember why I don’t like boats.

I return a different person. I feel like a true explorer, like someone who has just hitchhiked to the moon and back.

Antarctica is my favorite place on earth. It is extreme, fierce, but a fairytale at the same time. A place truly worth protecting.

How to visit Antarctica by boat or plane...

Hi Victor,
I was planning a long trip to Antarctica but after Knowing that this place is so cold then I decided to visit there in the summer season. Thank You for sharing this.

Hi Victor, Such a wonderful article. Antarctica is such a cool destination and i badly want to visit Antarctica but due to the Covid-19 Situation do you think it’s possible to travel? and how about the visa?

Thanks! It really depends on the travel restrictions/recommendations set by your country, specifically for Argentina (and perhaps Chile) as you will be departing from these countries. I doubt there any problems on board of the ship/plane to Antarctica, as there were a limited number of passengers even when I visited it. In terms of visa, you would have to check specific requirements for your departing country, again more for Argentina and Chile, as Antarctica itself doesn’t require a visa.