It’s me, 30-something Dutch explorer Victor Eekhof. My home base is Amsterdam, but I have always found ways to get back on the road as much as I can. Using my extensive travel experience (60+ countries on 7 continents, ranging from Antarctica to North Korea) as a basis I aim to provide useful budget tips, hacks and guides for lesser-known destinations.

I write about topics like local food, accommodation and cultures, but I also touch upon just about anything travel-related from packing to returning home after a long trip.

I don’t consider myself a full-time traveller, as I have never travelled for longer than 8 months at a time. I believe in creating a perfect balance between travel, work and personal relationships.

Looking for some travel advice? Are you interested in working together? Did you spot an error on the site? Or do you simply want to say hi? You can get in touch with me.

Victor's story: a lifetime of travels

As a 6 year old kid my mother used to take me to Schiphol airport in The Netherlands to look for last-minute flights. These flights usually would include a stay at a 2 or 3 star resort and if we would be lucky also a breakfast, which I remember was mostly a few slices of white bread and some yoghurt. We would travel to destinations like Madeira (Portugal), Cyprus and Santorini (Greece), basically anything that we could get to on a cheap package deal. As my mum was always on a tight budget, that’s how about all of the holidays during my childhood went.

Now, 25 years later, I’m still chasing budget flights and accommodation. I make a game out of finding the cheapest flight and accommodation. My first trip out of Europe was to Australia, New Zealand South-East Asia. I found a cheap “Round the World” ticket online for about €1.500, taking me to all these destinations and back. A new world opened up to me. My anxiousness turned into excitement: there was so much of this earth I haven’t seen yet, and I was eager to see it all! So here we are, 60 countries later. Still as excited to see it all, but even more excited to share my experiences with others.

Stubborn yet curious by nature, I’m always out to find the best things in life, but on my own terms. If the masses go left, I turn right. I found that usually the alternative options are easier on the wallet and exponentially more fun too! This is what you can expect most from this blog: I want to show you an alternative way of traveling. 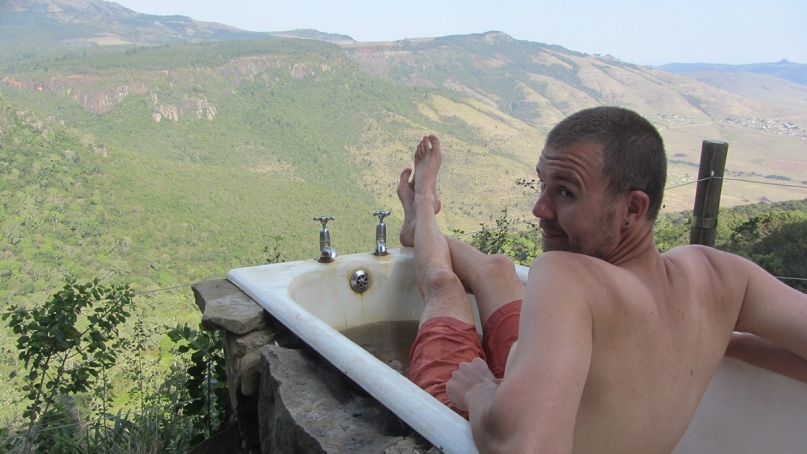 In the best (and probably dirtiest) bathtub in South Africa.

Around 2009, while I was working at a major financial institution, the crisis hit the market like a hurricane. Nobody knew what would happen, and worse, when it would happen. Companies were trying their hardest to get as lean as possible fast which inevitably meant firing people. As I was working on a temporary contract, I was one of the first to go. Now imagine having to find a job in a market like that, all recruiters and hiring managers terrified of what would happen next. Hiring new people was the last thing on their minds. Guess who was looking for a job in these times? That’s right, yours truly.

I was young, 23 years of age to be exact, and was starting some sort of career. Climbing the ladder of, well, who knows. I had some money saved to buy a house, but since that wasn’t going to happen either in those circumstances I asked a view friends: what should I do? “Take any job you can get your hands on!” or “Go back to university to study!” is what I heard most. “Go backpacking!”, is what a friend said. Hmm, that hadn’t really crossed my mind yet.

My suit-and-tie self didn’t really feel much like a backpacker at the time, I found it a bit scary even: “But what about x?”, “What if x happens?”, “Surely backpacking is not the answer!”. Thank glob I got myself together and went on a 6 month trip to Australia, New Zealand and South East Asia that would change my life forever. Now, 60 countries and 7 continents later, I still have an insatiable hunger for travel.

“Go backpacking!”, is what a friend said. Hmm, that hadn’t really crossed my mind yet.

A traveling milestone: Alaska to Antarctica

On my second major endeavor back in 2011, starting in New York and traveling up to Alaska and back down again to Antarctica (mostly over land), I decided that my goal was to raise awareness and money for a charity. A great cooperation with green search engine Ecosia followed. Their ad revenue goes to restoring an Amazon rainforest through WWF, and they wanted to get more exposure in North and South America. I ended up visiting many green initiatives in North America and writing about them.

Initially the articles where published on Ecosia’s blog, but soon I noticed I wanted to write about other travel related topics as well. Hence, I bought the domain name Victorstravels.com and set up a simple WordPress blog. Today I’m still writing stories with equal, if not more, passion than before. I’m glad I started writing in the first place! 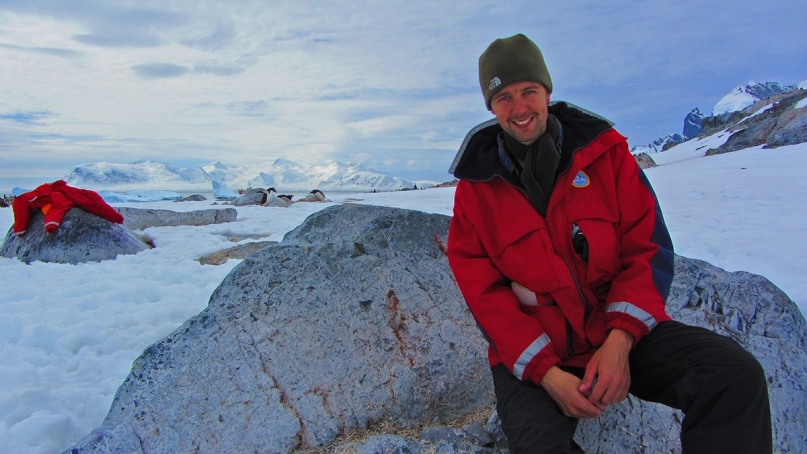 Reaching Antarctica was a major milestone.

Looking for some travel advice? Are you interested in working together? Did you spot an error on the site? Or do you simply want to say hi? You can get in touch with me.

View All
View all adventures

I keep track of the countries I visited (not counting layovers) and itineraries on trips that last more than a few weeks.
Read more »

From hauling a 25kg backpack to traveling light weighing only 10kg; this is what I currently bring with me on my travels.
Read more »

Selfies around the globe

I take a selfie in every country I have been to, because why not.
Read more »

On my travels I have experienced loads of amazing new experiences, but there are a few that stood out.
Read more »